Mason David Joseph Alexander went to Heaven on June 1st, 2016 at just 4 months and 7 days old. He passed peacefully by his mother’s side as he took his afternoon nap and woke up in the arms of Jesus.

Mason left us sooner than we wished, but those who were touched by him understood that the quality of existence far exceeds the quantity of time in which one lives. His radiant smile could light up the room, melting the hearts of those around him.

We held him for hours, snuggled him for days on end. We watched his favorite cartoon, Backyardigans,  so much we began to sing the songs even when it wasn’t on.  “So smile, Won’t you sm-ii-ile…” His doting big brother, Max, loved him more than anything in this world. He was so proud and would introduce him as “his baby.” They loved to cuddle up and watch cartoons together. Together they would laugh and smile more than they did with anyone else.

With Mason’s passing we remind others that his life is one to be celebrated each minute of every day. Although we will miss him everyday, he will forever remain in our hearts. It has been a privilege to be his parents and we wouldn’t have changed having him in our lives for anything in this world. We are so thankful for the gift of his life.

A Celebration of life will be held at Vineyard Church 12300 NW Arrowhead Tfwy, Kansas City, Mo 64165 on June 11th, 2016 at 10 am followed by a graveside service at White Chaple Cemetary 6600 NE Antioch Rd, Gladstone, Mo 64119. The celebration of life will continue at the ReeceNichols office at 201 NE 91st St, Kansas City, Mo 64155 where lunch will be served. All are welcome to attend at any point during the day.

In lieu of flowers, memorial donations are requested to be made to: 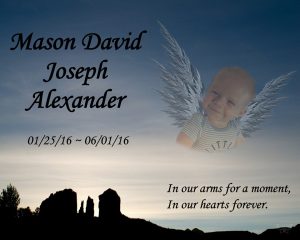